The Green Island Ficus – Ficus microcarpa, [FY-kus my-kro-KAR-puh] is a slow-growing plant that belongs to the fig family Moraceae.

The ‘Green Island Ficus’ is different and known for its smaller size and more ‘friendly’ root system. 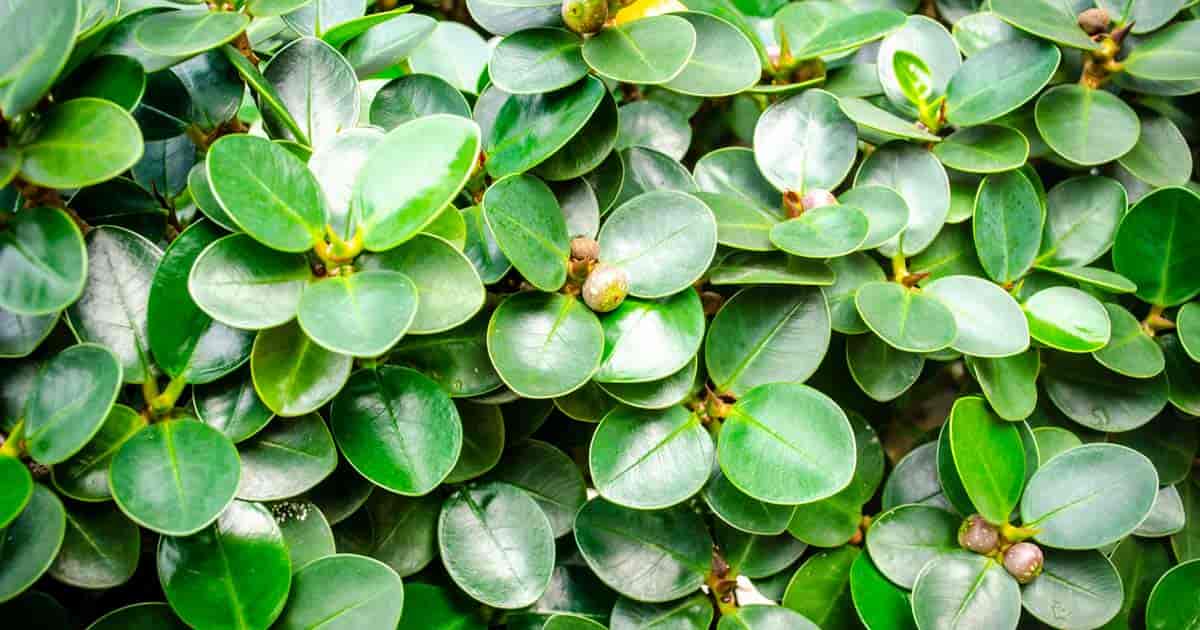 In 2001, the Florida Nurserymen and Growers Association (FNGLA) recognized the Green Island Ficus as the ‘Plant of the Year’.

A quick glance of the Ficus green island and its glossy green leaves one could mistake the plant for a jade plant at home in a tropical garden.

In its native regions, Ficus microcarpa can reach over twenty feet tall with a massive canopy.

The selected varieties commonly sold and cultivated in North America are a little smaller, reaching 8′ feet tall if left unattended.

The plant is typically grown as a low hedge or as a ground cover. The shape is managed by pruning to keep the Ficus at the desired height.

Some people keep it trimmed from an early age to maintain it as a small Japanese bonsai tree.

As a slow grower, the plant is easy to manage but the root system tends to spread quickly, which is why it shouldn’t be planted close to other vegetation or structures.

The ficus is a tropical plant and thrives in warm, humid locations. It’s recommended for USDA hardiness zones 9 to 11.

In areas with dry or cool weather, the plant should be grown indoors or moved indoors in the fall.

Outdoors, it should receive full sun to partial shade.

Microcarpa can handle full sun and is recommended in regions with high humidity while part shade is preferred for drier areas, helping the soil retain more moisture.

When placed indoors, ensure that it gets plenty of light throughout the day.

Consider setting it in an enclosed porch as the large glass windows often help trap in more humidity compared to the rest of the house.

This low-maintenance shrub doesn’t require frequent watering except when young.

Until mature, water two to three times per week throughout the warmer months. Fertilizer isn’t needed.

After the plant matures, it only needs infrequent watering, about once every one or two weeks.

Give it a deep thorough watering, saturating the soil without completely drowning the plant.

Use ordinary soil with good drainage. The ficus is an easy plant to grow and tends to take root in almost any conditions unless the air is too dry or cool.

If the plant is grown in a container throughout the year, transplant it every two years to freshen the soil or if it outgrows its home.

Transplant in the early spring before active growth starts.

Grooming is the main maintenance task when caring for the Green Island Ficus. It is easy to keep small with pruning.

Always use sharp pruning tools and trim throughout the year as needed.

The roots can be divided and separated to spread the plant or grow new plants.

Take a cutting from a younger plant, dip it in root hormone and plant it in its own four-inch starter container.

Don’t cover with plastic. Simply set it near a window and keep watered.

Within a few weeks, the cutting should take root, becoming its own new plant.

It can then be transplanted to the ground or kept in the container as a small bonsai.

Green Island Microcarpa is easy to care for with no major pests or disease problems to worry about.

However, mealy bugs and scale insect pests do set up residence on the underside of leaves and along leaf axils.

Inspect plants for pests and apply Neem oil for control.

Green Island is best grown as a low hedge or as a small Ficus bonsai plant.

The plant grows easily indoors as a small house plant or outdoors. When planted in large containers and planters it makes an attractive bush when pruned for shape.

When grown from cuttings it’s easy to keep trimmed as a small bonsai tree.