Senecio Stapeliiformis Care: How To Grow The Pickle Plant

This succulent species has reclining to erect stems, which branch out from its rhizomes stem base. 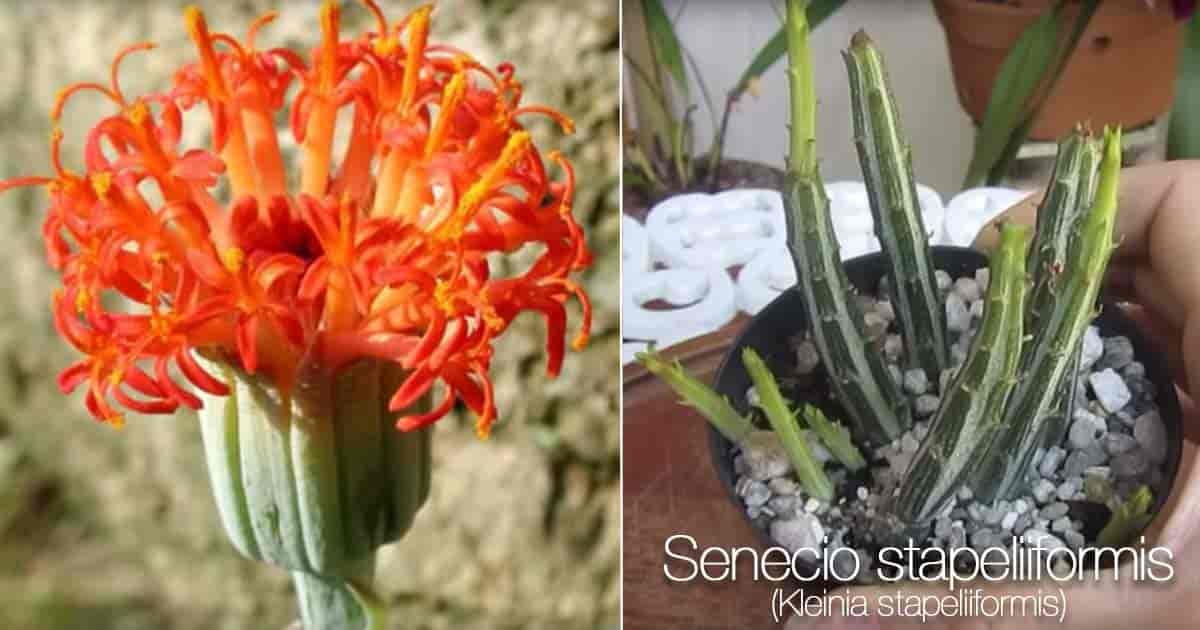 This plant belongs to the family of Asteraceae and is native to South Africa.

You may also hear it called by its common names including:

The stems of this plant are highly succulent, brittle, soft, cylindrical and jointed.

They have four to six grooves, or angles with scale leaves sprouting all along the ribs.

The leaves are typically dark green, and also have a unusual pinkish tinge.

For optimal growth, this plant should be placed under full sun to partial shade.

Give this plant at least three hours of direct sunlight every day; make sure to place it on a balcony or in a garden when the temperature increases to 50° degrees Fahrenheit (10° C) or more.

This plant prefers warmth throughout the year.

Once this plant has become well established, it is highly drought-tolerant.

It still needs water, especially in the summer season.

However, you need to make sure its soil doesn’t stay wet for an extended period.

In between watering, it is recommended to let the soil dry out during winters.

These plants grow in sandy soil, which means nutrients must be replenished.

It is best to fertilize it lightly as an extra amount of fertilizer annually can result in leggy growth.

Feed this plant from spring to fall with cacti and succulent liquid, standard, or organic fertilizer after every four to eight weeks.

Senecio Stapeliiformis are not too fussy about the pH of soil.

They can thrive in a neutral range of pH.

However, it is essential to ensure the soil is well-draining and more towards the sandy side.

If the soil is left damp for a prolonged period, the plant will start rotting.

The ideal mix for this plant is a mixture of pumice, bird sand, and potting soil, or any usual mixes used for succulents and cacti are fine for this plant too.

It will also grow in pure pumice.

The taller the pencil-like stems grow; they tend to start getting floppy, which is a problem if they are in a potted plant.

These should be pruned back towards the firmer side of the stem during early spring.

If there is a need for repotting, it is best to do it during late spring.

In containers, these plants prefer to enjoy their summers outside but make sure to transfer them indoors during fall.

During the spring and summer seasons, Senecio Stapeliiformis requires more watering to bloom and grow.

You would have to remove flower stems to maintain its tidy appearance.

It is best to trim and remove older stems so there is room for new ones to grow.

How To Propagate Inchworm Plant

Senecio Stapeliiformis is propagated with cuttings or seeds.

They require continuous moisture and warmer temperatures for the seeds to germinate.

Propagation through cuttings is a faster and easier method.

It is best to cut during spring and fall seasons which are the growing season for this plant.

It is best to cover this plant in frost-free zones and grow as container plants.

Keep in mind if you are propagating this plant through cuttings, you can’t just snip off the cutting and put it in water or soil to begin the rooting process.

The cuttings of succulents can store water in their bare roots, leaves, and stem, which makes them vulnerable to rot by bacteria and fungi entering the cut surfaces.

This is the reason why you shouldn’t place the cuttings in the soil directly.

This plant is mostly pest-free but might occasionally be attacked by succulent mealybugs and scale.

Senecio Stapeliiformis is often used as potted houseplants or placed indoors to add beauty to any nook.

It also makes a great groundcover.

12 thoughts on “Senecio Stapeliiformis Care: How To Grow The Pickle Plant”