Growing tomato plants can be made much easier if, as a gardener, you know how to look for various problems that can arise. Many times a tomato plant can fall under the “spell” of several problems but is misdiagnosed.

Indoors or out providing all the information available helps greatly in identifying and diagnosing the potential cause.

Some of the diseases that could hit your tomato plants include:

.. other fungal diseases and other types of wilting caused by fungus, a pathogen or any plant disease-causing agent.

Read on to learn more about tomato disease identification. 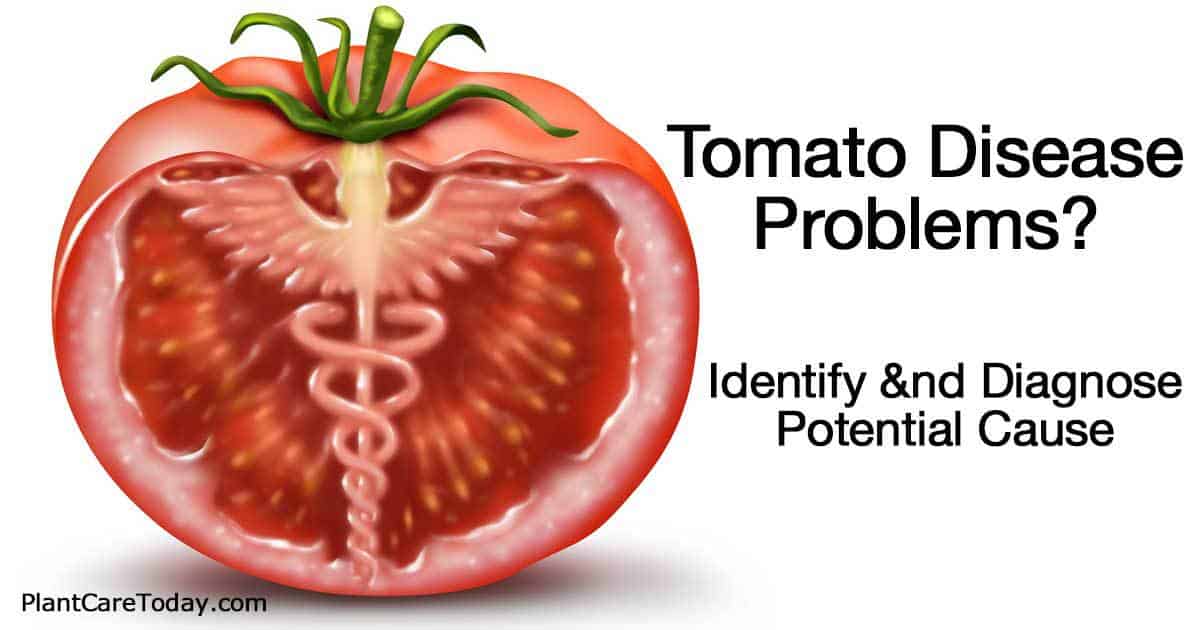 Thanks to Cornell, they have an informative guide from Vegetable MD Online, has dozens of leaf symptoms with picture and synopsis guides of each one. Certain viruses are more common in certain parts of the country, and some bacteria only effect parts of the plant, while others destroy all of it.

When plant nutrients are in great excess or extreme deficiency, the symptoms on the tomato leaves or in some other plant part generally reveal themselves to the naked eye.

Such infected plants look “sick.” However, the growth and productivity of diseased plants are considerably reduced before definite symptoms are noticed.

Be cautious, before placing any blame for the condition.

Frequently the causes of poor growth are rather complex and cannot always be readily traced to a lack or excess of a single factor or the wrong ratio of plant food nutrients.

Insects and seed or soil-borne diseases may disturb the internal functioning of the plant enough to give it the appearance of being deficient in some plant-food nutrient.

Severe damage to the roots by larvae of various insects, or intensive feeding of minute insects on the foliage cause plant reactions that sometimes are difficult to distinguish from mineral deficiency symptoms. Use neem spray oils for control.

Occasionally, poor growth can be traced to the presence of large tree roots; a leaky gas main; too much shade, particularly in the morning or to a subsoil drainage problem.

Correct diagnosis of a trouble is not easy; it can cause many a headaches.

The use of a starter solution high in phosphorus (one ounce of 10-10-10 or 10-52-17 to a gallon of water) at the rate of one-half pint per plant, will generally give tomatoes and peppers a vigorous start. We also like epsom salt.

Periods of low night temperatures, below 55-60° F., or high day temperatures, above 95° F., also frequently cause blossoms to drop in both peppers and tomatoes.

However, on the early tomato fruit varieties that produce a large number of flowers, nitrogen is needed to stimulate plant development.

A fertilizer containing no nitrogen and equal proportions of phosphorus and potassium (0-14-14 for example) on well-manured, or heavily fertilized gardens or a low nitrogen (3-12-12 or a 5-10-5) ratio on other soils is generally well suited to both tomatoes and peppers.

A two to three pounds broadcast application is generally sufficient.

Applications of one-fourth to one-half pound of additional nitrogen material will benefit early varieties after they have become established.

This may be applied to later varieties, if needed, after the first two or three clusters of flowers have set some fruits.

The general vigor of the plants is a safe guide in determining the need for this application of nitrogen.

On deep soils of good physical structure the fruits of most varieties generally will be smooth and free from cracks or rotten areas on the blossom end.

A well-aerated soil promotes deep rooting, enabling the plant to obtain an even, regular water supply.

Clearing your garden from pests such as spider mites, root-knot nematodes and aphids that infest the stem, fruit and leaves will help avoid diseases on your tomato plants.

On soils too high in nitrogen, hoeing in a straw mulch will utilize some of the excess nitrogen.

Purple or bluish tints in tomato plant foliage on dwarfed or spindly plants generally indicates a deficiency of phosphorous, although cold weather may give the same discoloration.

A marked deficiency in available potassium may cause a dark green, stunted plant and uneven fruit ripening.

Hot sun at high temperatures yellows fruits on the exposed side.

Magnesium deficiency is somewhat common with tomatoes and why many add epsom salt regularly is a “secret weapon”.

When you begin to look a a problem on your plants, take to time to completely access the conditions before taking action.