Here’s the deal with growing the Belladonna Plant, also known as the Amaryllis Belladonna Lily under the family Amaryllidaceae… with this lily, good results often are a matter of luck.

Good results with most kinds of garden flowers indicate gardening skill, but there are a few – like the Amaryllis Belladonna – where good results may be largely a matter of luck. 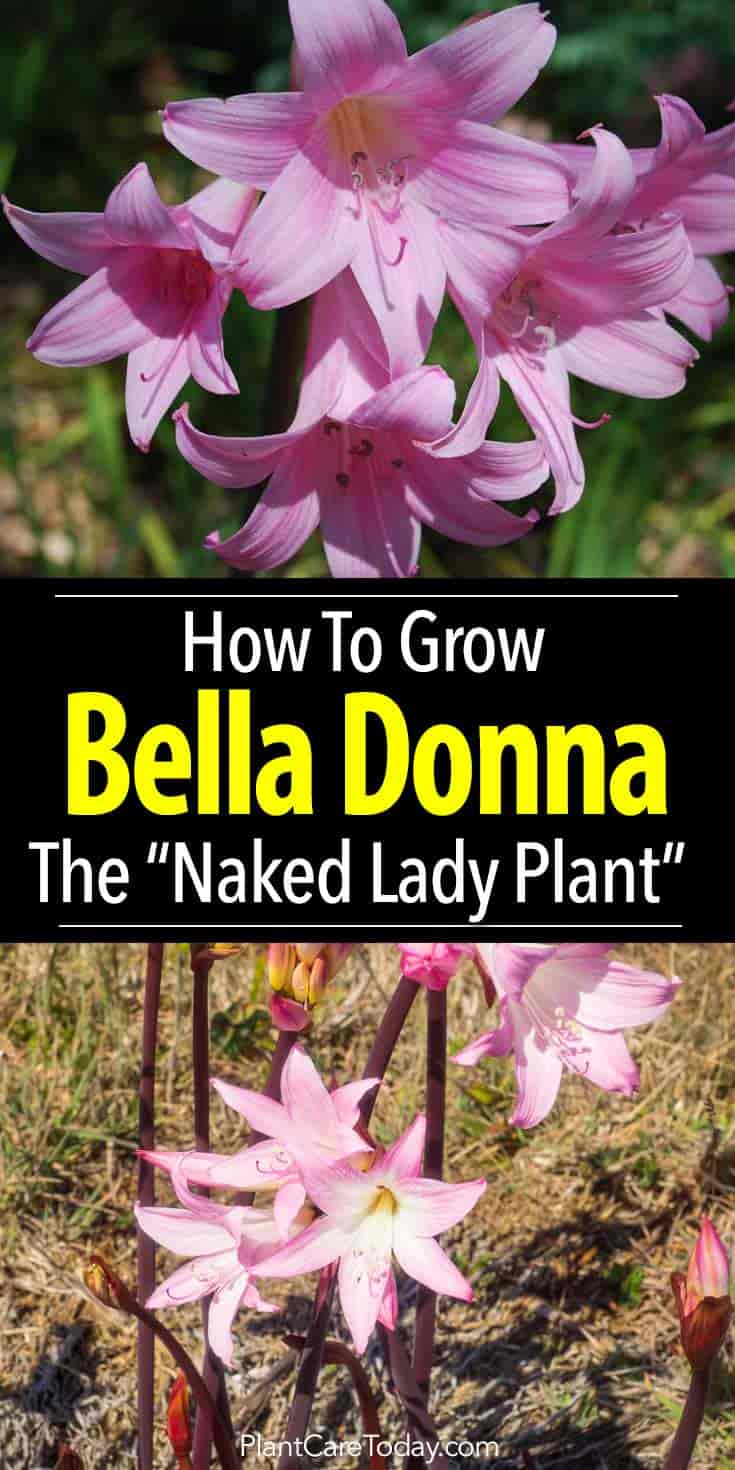 The Amaryllis Belladonna plant ranks high on the list of capricious, temperamental kinds. The beginner is as likely to have good results and blooms as the seasoned gardener with this Amaryllis species.

The Belladonna Lily is a native to the Cape Province of South Africa. Due to its extremely exquisite nature, this lovely plant species has found it’s way too many destinations such as Australia, Chile, Cuba,  the Dominican Republic, Haiti, Mexico, New Zealand, Portugal, California, Louisiana, Texas, and other African countries.

Where And How To Grow Amaryllis Belladonna – The “Naked Ladies Plant”

However, beauty aside, what the belladonna will do in the garden next door may be a slight indication of what it will do in one’s own garden. The only commonly known way to get a bloom from it is to plant bulbs and wait until it decides to flower.

Pink ladies flowers pair well with many other flowers because of its dainty shades allowing the pink lady flower to fit in with a wide variety of garden settings.

Belladonna is translated as “beautiful woman” in Italian. The blooms atop leafless stems has given way to name – the “Naked Lady Flower.”

It has been described as “the showiest ornament of its season” and so enchants many a gardener that they would rather give it space for years without bloom than abandon hope of flowering it.

In England, the belladonna amaryllis naked lady has been standard for a couple of centuries for hot, sunny places. In many California gardens it self-sows freely and spreads rapidly. But even in England and California it may sulk four or five years if moved at the wrong season.

The Confusion Of Two Different Plants

Unfortunately, and though no one’s fault, much of what is in print about the belladonna amaryllis lily is misleading. Two different plants with very different habits are called belladonna plant and there is rarely any way to tell of which one someone is talking about.

Add to this the fact that botanists since the days of Linnaeus have disagreed about the correct Latin names for the two kinds, and there is ample basis for the confusion.

A large part of the world, including students of Webster’s Dictionary, knows the belladonna plant as Amaryllis belladonna. For years some specialists have called it Brunsrigia rosea and was listed in catalogs as such.

Also the main difference between the Belladonna Lily and the Hippeastrum is that the latter has hollow stems.

How To Care For The Amaryllis Belladonna Lily

The Amaryllis Belladonna plant is happiest when it is getting plenty of sunshine, warmth and full sun. Make sure to place it either beside a sunny window or on the outdoors. The way it reflects sunlight makes it more attractive in its natural state.

It has been at times recommended for growing indoors in pots but is usually more unreliable when grown that way than when grown outdoors – and is much more bother.

If you’re planning to grow the “Lily Naked Lady” in pots, make sure that the soil maintains a level of dryness throughout its life.

When planting use a well-drained soil for your Belladonna Lilly and keep in mind not to let excess water hang around for long, especially around the roots.

Otherwise, the true beauty of this plant will not be realized. Naked ladies bulbs may rot and the funnel-shaped flowers may appear to be unhealthy, or it might not even show up at all.

Sighting Reported Of Growing Belladonna Lilies In The US

Where drainage is good and the location slightly sheltered it has survived outdoors in northern Ohio, but the farther north it is grown, the greater the uncertainty about its blooming.

Apparently only an occasional season is mild enough to enable it to mature bulb strength sufficient for flowering in the northern part of its range.

Most growers seem to agree that the bulbs of Amaryllis Belladonna like a summer baking. Hence much of the Midwest offers conditions favorable for it. Good bloom has been reported from various parts of Oklahoma.

I had a friend report bloom in central Kentucky five years after planting. Further south than Oklahoma and Kentucky results should be better.

There are several varieties and many strains, which is one reason for varying results.

Part of the luck involved in success with the Amaryllis Belladonna plant lies in getting a start of a strain suited to one’s locality.

There are two phases of care for the Belladonna Lily. The first is during its growth period, and the second is its rest period.

The best time to start bulbs is in the late winter period. If you order bulbs online, place your bulbs in water – making sure to soak only the root parts and not the whole bulb overnight before planting them.

The bulbs are huge. Different growers recommend different planting depths. Carefully plant the lily with the tip just showing or else barely covered.

Experience seems to indicate the ground should be heavily watered at flowering time, either by rain or by sprinkler system.

If growing in pots, prepare the pot and place nutrient-rich, well-drained soil, then plant them as recommended.

Experience also seems to indicate, the longer the bulbs are out of the ground at planting time, along with the greater the drying back of root growth, the more years it will take the bulbs to flower.

Provide infrequent water for new bulbs, and occasionally as they grow. Allow the potting soil to dry out before watering them again.

You’ll observe the first growth in the ribbon-like foliage come early to late springtime. Foliage dies back completely in June.

The bare flowering stalks appear suddenly a couple of months later, in the same fashion as the common Lycoris squamigera.

The straight stem can potentially grow up to 30 inches in height, followed by the delightful bell-shaped flowers numbering around a dozen in the late summer.

The unusual Belladonna flower shape seemingly captures the sun’s rays and reflects it in a way that the Belladonna Lily appears as though it is glowing and glittering brightly!

Don’t be alarmed if the blooms don’t open up all at once; they are designed to flower one after the other in a short 4 to 6-week span.

The Belladonna Lily sends up a single flower for each stalk in a flowering bulb, which bursts into a glorious full bloom in the months of July, August and early September.

During this period, the air is delightfully fragrant with a fruity, heady smell.

Amaryllis Belladonna lilies take a rest after the flowering period is over. It would be best to move the Bella Donna inside your house during winter to keep it in a cool and dry state.

You may move the precious flowering plant to a cooler area in the house and gradually decrease water until blooming season starts again.

The bulbs lie dormant during wintertime, so further watering is not needed at all. The optimal temperature for a resting Amaryllis in dormant period is somewhere in the 50s.

February is the time when the Belladonna Lily awakens and starts another growth and flowering cycle – hopefully.

Bulbs moved with no drying of the roots just after flowering stems die back will often bloom the following summer.

The quality of the blooms could depend on how many years the plant is left undisturbed.

Meaning, repotting and transporting should be done in as little frequency as possible. It might not even be needed as long as your plant is in good shape.

Ideally, the plants should be mulched to prevent tip freezing, with a mulch that would not reduce the amount of winter light.

Caring for your Belladonna Lily plant requires much sunlight (full sun), water and warmth during its growth period while keeping the air and soil cool and dry during winter and rest.

As mentioned, get well-draining soil and be wary of water accumulating around the base and the roots of the Amaryllis Belladonna.

Remove withering leaves and spent flower stalks to lend a healthy appearance and to allow further growth of healthy and fragrant flowers.

This will usually start when the end of the summer is near; pull or cut them delicately when they appear completely browned.

Poor flowering can also be the result of an inadequate diet. Plant owners may give their plants diluted liquid fertilizer while in leafing stage; liquid plant food applications are also allowed in moderation as they grow.

Keep your Lily free of spider mites control them by wiping the leaves and occasionally misting them if the air becomes too dry.

In the instance where an all-out attack happens, use a natural pesticide like neem oil. Follow the labeled directions as instructed for optimal results.

Propagation Of The Amaryllis Belladonna

Propagation of your current Belladonna Lily can be quite difficult. Sometimes the large mother bulbs produce small, side bulbs; you may remove this and do the same preparation for the new bulbs.

Put them in separate pots with rich, sandy soil and wait for them to grow. It could take around 2 to 3 years to see the fruits of your labor.

Bella Donna can be grown from fresh seed. Seeds vary in size from a grain of rice to a pea and are iridescent as mother of pearl.

When the capsules in which they ripen fall to damp ground the seeds sprout in the capsule as peas sprout in the pod. When I adapted this procedure by placing freshly collected seed in a plastic bag with a bit of damp sphagnum moss I had perfect germination.

Hybrids And The Belladonna Plant

Gardeners who wish to do some hybridizing with a view to leaving the gardening world richer than they found it will find that the belladonna can be crossed with many members of the Amaryllis family.

The most widely sold cross is known as – Amacrinum, a hybrid of the belladonna lily and a Crinum lily.

Belladonna Lilies deserve your attention due to its wonderful properties.

The best time to buy the bulbs would be either during late winter, late summer or early spring.

It’s not to difficult to pick up the Belladonna Lily and care for it, as long as you keep in mind – patience is required. This plant could even outlive you when they are properly cared for.

43 thoughts on “Belladonna Plant Care: How To Grow The Amaryllis Belladonna Lily Bulb”

John from http://www.growingyourgreens.com/ answers your organic gardening questions including What is the best water to water your garden? What can you grow in Texas? Why rock dust does not work?