The Ixora plant is loved by many because it produces clusters of star-shaped flowers all year round.

Each cluster consists of flowers that come in red, yellow, pink, or orange color. 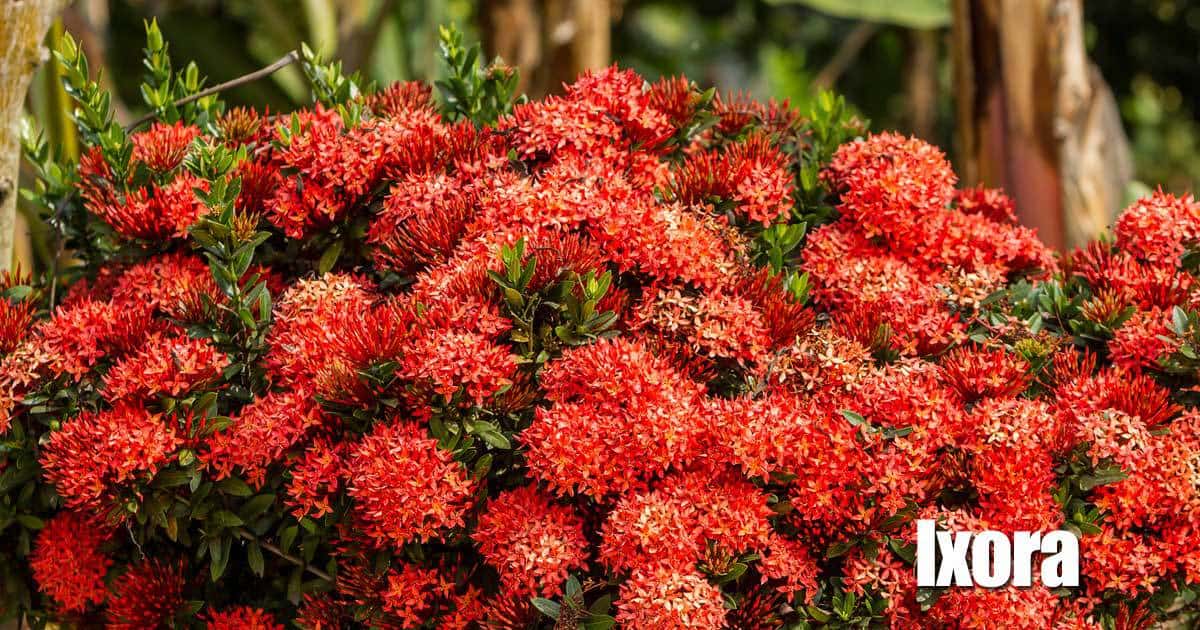 Clusters of these charming blooms are scattered randomly throughout the whole plant and are usually seen at the tip of the upright stems of the plant.

Dwarf Ixora are popularly used as low hedges because of their shrub form and compact appearance. They look attractive when they bloom profusely. However, after blooming, it will take some time for Dwarf Ixora to re-bloom.

Reverse the old saying “you can’t see the forest for the trees,” and you’ll have one that applies to hedges: “you can’t see the plants for the hedge.” How often do you really see the individual plants, instead of the overall symmetry of the planting?

Long before ixora was used as a house plant, I saw the larger Ixora plant with bright red flowers used as a formal hedge in southern Florida.

I remarked to a friend who was with me that I thought it would make a beautiful plant for my indoor garden up north, and she looked at me obliquely, wondering whether I was joking or had had too much sun!

Some notable ixora species under Rubiaceae family include:

Ixora (pronounced ix-OR-a) is a shrubby evergreen with glossy-green, opposite leaves. As you might expect from its use as hedge material, it is amenable to being cut back severely or shaped whenever necessary.

Never allow the evergreen ixora shrub to become root-bound in a pot smaller than the ultimate size you want it in, and pot large plants firmly in coarse, turfy material.

Established plants usually produce three flower crops a year. But, with Ixora hedge flowers being so long-lasting, and such a short resting period, plants bloom almost constantly, and they start flowering when small.

The most commonly seen variety has – scarlet flowers, and other varieties produce clusters of pure white, pink, red (dwarf red ixora) and orange.

The blooms are extremely showy, having long, slender-tubed corollas with four (sometimes five) wide-spread lobes, and borne in full heads.

These acid-loving plants prefer acidic soil over alkaline soil. Conduct a soil test to make sure the plants get the right kind of soil to thrive onto.

Plant ixora bushes in well-drained soil to help lessen the effects of accidental over-watering. Either sun (not full sun) or partial shade agrees with this plant.

Mine hasn’t seemed particular about the temperature, although 65° to 70° degrees Fahrenheit is suggested for them.

My plant has resisted our newest indoor pest, thrips, and seems equally resistant to scale and whiteflies, but if these insects should appear, standard remedies may be used.

One thought on “Dwarf Ixora: Growing And Care”