It is a member of the Aizoaceae (ay-zoh-AY-see-ee) family and often confused with Lithops (living stones).

The US Department of Agriculture recommends the split rock plant for USDA hardiness zones 9 to 11.

This stemless plant only attains a height and spread of a couple of inches.

These ancient plants can spread to several inches as they produce offshoots to form a group.

The leaves range in color from grayish-green to brown and patterned with spots.

Pleiospilos should never have more than four new pair of leaves at a time.

If the split rock produces more than four new leaves, it means you are watering too much.

Split Rock Plant blooms in the springtime after a winter dormancy period.

Flowers are usually orange or yellow. Occasionally a plant will produce a pink or white blossom.

The blooms are large considering the small plant size and are held aloft by the short body of the plant.

It does best indoors in a south-facing window in winter.

In the summertime, allow Pleiospilos to enjoy bright outdoor light.

Some successful growers water only twice a year or depend on water from rainfall.

Water the plant allowing the potting mix to become moist and until it runs through the drainage holes in the bottom of the pot just like any other cacti.

Do not water again until the potting soil becomes completely dry and the plant begins to wither a bit.

Remember, the size of the split rock succulent allows them to grow naturally among pebbles, sandstone, and quartz gravel, and require an exceptionally sharp well-draining soil.

If the plant fails to completely absorb its old leaves by the end of the winter, consider removing them. Be careful, though.

If they do not come off easily, leave them alone as you do not want to damage the plant. 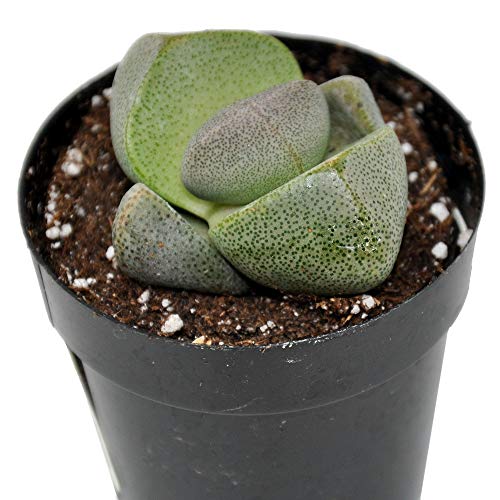 Although these plants do occasionally produce offsets, it is rare.

Growing from seed is the most common method of propagation.

Most growers scatter the seed over coarse sand and keep it slightly damp works best.

Hand sow seed early in the spring and keep the seedling tray in a warm place with bright, indirect light.

First and foremost, it can take a very long time for these plants to sprout.

Overwatering is the main problem with Split Rock succulents. It is very prone to rotting from excessive water.

Along with other succulents, an overwatered/rotting plant is more attractive to common pests, especially aphids and scale.

Is The Split Rock Plant Considered Toxic or Poisonous?

It is common for people in South Africa to gather these plants for the moisture they contain.

According to the ASPCA, they are not toxic to dogs, cats, or horses.

Pleiospilos is slow-growing and not invasive.

Outdoors the Cleft stone plant makes an attractive conversation plant for a bright patio, deck, or balcony in summer.

Provide a pot with a depth of 3″ – 5″ inches to accommodate the plant’s long tap root.

In hot, dry climates, this extremely drought resistant plant is an excellent, year-round addition to a rock garden or outdoor cactus collection.